A Walk In The Woods

Posted by Brian James on March 11, 2019 in Olympus, Photography

As I mentioned in the last post, I have taken to doing a bit of walking since coming back from holiday. Well, I’ve managed to live in Brampton for some thirty three years and yet never been to the Ridge Wood between Brampton and Lannercost.

I took a walk, along with my Wife Sue, out to the Sands in Brampton and up onto the path to the Ridge.

The views out to the North West are amazing, looking out over the Solway Estuary to the hills over the border in Scotland.

Taking the camera out as I go for my walk is proving to be really enjoyable as it takes my mind off the fact that I’m walking (i.e. doing exercise) and trains my mind onto what I’m looking at.

As mentioned, a lot, recently I took my Olympus camera along with me. The lightness really makes it enjoyable to carry. Unfortunately my poor old Canon system cameras are sitting….in their cases….at home….feeling unloved.

I loved going into the woods. The moss on some of the trees in the shade of the woods visually almost jumps out at you and taken as an abstract takes on a form of its own.

I love getting in close to the trees and looking at the way the marks and gouges out of the bark on the trunk tell a story of the trees journey over the years to maturity.

he path through the woods is easy to follow but rather rough underfoot.

Every step produces a new view, a new perspective and a new experience.

Heading off through the wood we eventually come out at the Lannercost road. A couple of miles on and we reach the Abbey Bridge.

I’ve taken many photos of Abbey Bridge in the past and each time there is a different way to see it. You have seen it on several other posts on this site including a year ago when I had to battle through the snow of ‘the beast from the East’

This time we went down to the water side and took a couple of shots from underneath the arch.

While I was there I got inspired to come back at an alternative time of day which you’ll see in a future post soon. But for now we were off on the road again.

The poor dog, Alfie our five year old Cockerpoo, has walked for miles but he absolutely loves it. Being the combination of two different hunting dog breeds, Cocker Spaniel and Poodle (poodles were originally Russian hunting dogs) means that he has huge amounts of energy to dissipate.

It’s not often that we can let him off the lead to run free but he had lots of opportunities along this journey, until we noticed an electric fence along the side of the path. Luckily we noticed it before he touched it. 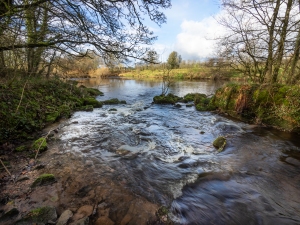 ore we left the Bridge area I decided to play around a little as the water flowed through under the bridge.

Its always worth playing with different techniques even if you have done similar many times before. I braced the camera down against a rock and set the shutter speed to a slow setting. This, for the uninitiated, causes the water to blur and become creamy in its look while the camera being held steady keeps everything else sharp. Its a regular technique for many landscape photographers.

Our final stop was after walking along th 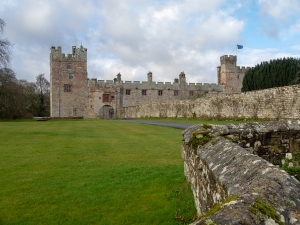 e narrow back road to Naworth Castle. It’s a private residence and so we respected that privacy by not attempting to enter the land but we did take a sneaky pic from the front gate.

It really is a magnificent building, as many castles in the Cumbria area are. A great way to finish our walk and to finish this edition of the blog.

In the next edition I’ll show you what happened when I returned to shoot at Abbey Bridge….at night.