Sedentary is a term dear to my heart. I usually find the idea of walking from the sofa to the kitchen quite a chore and really can’t understand why it’s not practical to drive that distance.

So imagine my abject horror when I arrived on my holiday in Paphos, Cyprus to find that the bus crews were on strike and my hotel was two miles from the town. TWO MILES!!! That’s almost another country!

My first day had started off badly. I didn’t sleep well in the hotel room even though the standard of both the room and the bed was excellent. So I decided to take a pre-dawn walk down through the hotel to the beach. Hell, why not take the camera just in case.

Being mid January it was still very nippy and so wrapping up in a fleece I wandered down in the darkness. 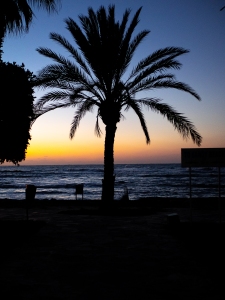 Over to the left you could just make out the landing lights at Paphos airport. I loved the way the light changed as the sun rose out in the East, toward the airport. Shooting at a slightly darker exposure than I normally have was fun.

I loved the sight of the palm tree with the, yet to be occupied, seat in its shadow. The slightly underexposed shot leaving the two said items in silhouette. Probably one of my favourite photos ever 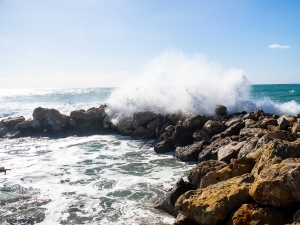 The sea was very choppy as it hit the man made breakwater with waves crashing into the rocks then flying twenty, thirty even forty feet into the air.

It was really difficult to get the sheer size of the crashing waves into perspective, as the rocks were all at sea and so there was nothing of significance to compare the rocks to in size.

The photo on the left show a breaker over part of the breakwater. the rocks on which were topping out some ten to twelve feet high of the surface water. Knowing that piece of information helps put the photo into perspective.

I loved some of the colour of the items, made even easier to photograph due to the lack of people on beach so early in the morning. Tourists canoes lined up waiting for the day to begin was an appealing sight.

The colours, still bright, but vibrancy fading away with their use in the salty sea water were a welcome break from the sand and seaweed left after the recent storms. 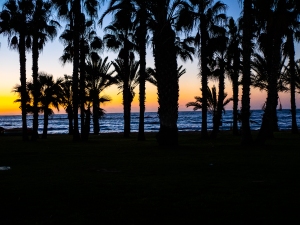 Once more a look through the palms blowing gently in the crisp morning breeze out to the South gave a view of the impending sunrise.

This wonderful soft even light lasts only minutes before the sun appears above the horizon to the east and over powers the warm orange glow, replacing it with a bright whiteness of hard light and strong edged shadows.

Slight under exposure of the foreground and a spot exposure on the sky just above the horizon gave a lovely rendition of sight with the trees deep in silhouette. 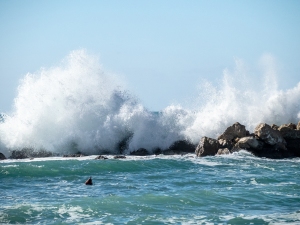 As the morning developed I realised that I had no choice but to put on my walking shoes and head off with my wife on the trek down the sea front West to the town of Paphos.

As already stated the sea was highly active with an enthralling aggression as it pounded the breakwater rocks. I put my camera onto a high shutter speed and attempted to capture the droplets of water which made up the sea foam.

All along the route the sea kept on pounding the shore. It really was impressive.

We came upon a jetty which reached out straight to the sea. This was just begging to be walked upon out into the foamy mass of water. 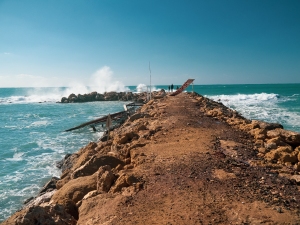 At the end were a couple of people, lost against the enormity of the water spray. Without them it would be impossible to gauge the size of the waves as the hit the rocks.

Midway down were the remains of a wooden mooring point. Much of it had been swept away by the power of the water. It’s just visible on the right hand photo here, slipping into the sea picture left.

In this shot I’m looking straight down onto it from above.

The beautiful blues of the sky and the clean crystal waters of the Med are in stark contrast to the warm colours on land as we walked down the beach path towards Paphos.

The palm trees, rather than being in silhouette like this morning, now almost radiated a warm brown light provided by the morning sun at the point where the layered trunk meets the lush green leaves.

Unfortunately, due to the recent storms, the sand was not its normal clean white appearance but rather a dirty fawn colour littered with dull, decaying sea weed washed up from the depths and dried in the sun.

As I was unused to walking I was using every opportunity to “just stop to take a photo” also known as take a rest. 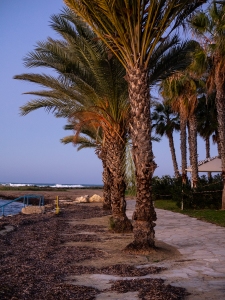 Two miles!!!, Two bloody miles!! I cant walk that sort of distance. That’s why I invested all of that money into buying a car for goodness sake. And to make it worse the further I walked away from the hotel…the further it is to walk back

However, I was starting to rather enjoy the stroll. I certainly would have missed many of the things I saw by driving into the town.

I was also well impressed with myself that I had, once again, brought the Olympus kit with me. Lesson learned from the Majorca holiday experience. Although this time it was with an OM-D E-M1 camera body.

The whole kit along with a big bottle of drinking water fitted neatly and lightly into my back pack which made the walk much easier. 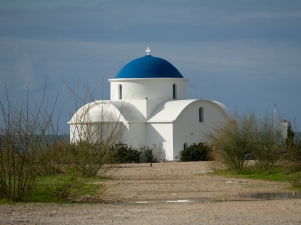 Not far along the track from our hotel we came upon a beautiful little church in the traditional Greek colours of white walls and blue roof.

It was visible for miles as its shone brightly in the morning sunlight.

It was one of those building you see and are instantly drawn towards for a close look. And it was well worth it. It became something of a beacon for the rest of the holiday, guiding us back toward our hotel just beyond it.

On reaching the harbour at Paphos, I looked back along the shoreline and was amazed as I saw the full enormity of the sea and it’s power.

I was even more amazed that I had walked the two miles to the town almost without noticing it.

Paphos is a beautiful little town. Unfortunately it has been nineteen years since I last visited it.

It had grown. A lot to do with EU investment. And although very much a tourist town, it still retained a quaint old world charm which I remembered from previous visits.

Looking out toward the far side of the harbour brought the castle into clear view.

This made me feel very much at home as I live near Carlisle in England where we also have a castle. A slab sided, boxy castle which looks like a sand castle made by a child. And here in Paphos there is almost a miniature version, standing resplendent at the end of the harbour, the only down side being the floatill of small, modern boats moored in front.

Final part of the walk for us was along the lovely little harbour at Paphos.

Obviously it has the standard waterfront cafes with their waiters outside putting lots of spin on trying to get you to use their establishment rather than the one next door. But it is clean, bright and welcoming.

I’ve busked on the streets of the UK many times in the past, it’s great fun, but the players in the street in Cyprus were of a totally different style.

The old guy playing the traditional instrument was great. He just sat there and played and it was very entertaining.

Highly skilled in his instrument he was a pleasure to listen to.

Moving on down the street and we came across a cool little combo playing some pretty smooth jazz in an outside bar (remember, this is January). Now this I really related to. They were great and I could have stood there and listened for hours.

A steady walk back to the hotel and a reflection on the five or so miles walked.

As someone who just does not walk anywhere if he can help it I was tired but pretty happy with my day.

Over the rest of the week I carried on with the walking each day, covering over twenty miles and to this point, just over a month after returning, I am still walking around 4-5 miles per day, lost a stone in weight and  covered over half a million steps since the 1st of January….and I’m keeping on going.

Amazing what a photography trip into town can do.

← Sun, Sea and Small Sensors
A Walk In The Woods →